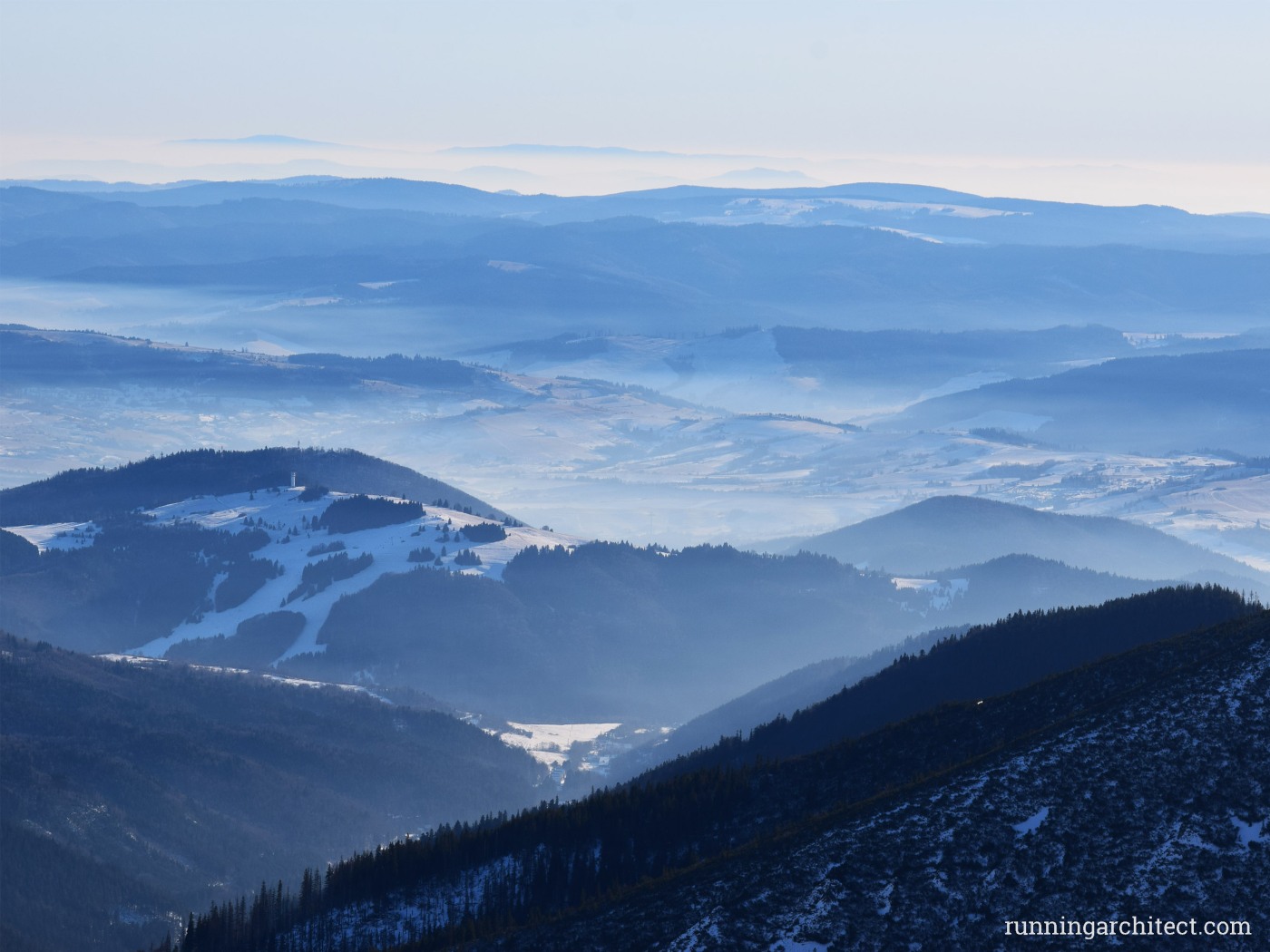 The beauty of each New Year to me is looking back and evaluating, maybe making new plans for the coming year. Last year, I hoped to have a better one than 2015 and looking at the charts, I can be proud of myself. I have improved. I might not have been hitting a lot of PRs but I have finally managed to incorporate sport into my mundane Mondays [1].

As I have mentioned before, I was able to train more regularly than last year. I have recorded 165 activities on strava.com. So you can say, I did something three days a week! If we compare 2015 and 2016 in terms of elapsed time, I have only trained for 86% amount from last year. Yet, it was spread into more units – 165 vs. 136 the year before. So, you can say, I did more shorter units this year, apprx. 40min each day..

The overall distance numbers are looking brighter as well, check out the charts below.

…cycling about 108% of last years distance. [2] It would be about 36.5k and 103min weekly. If I take the fact under consideration that I only bought a new bike in July, I was riding about 70k in 200min weekly during the time, I acctually had a bike. What is more, if I keep up the trend, I will be able to hit 5000k next year!

…significant improvement in running, about 145% of last years distance! [2] In average it makes 14.4k and 127min weekly. The altitude is even more impressive, 19,920m! It might be not a lot for those guys who acctually live in mountains but I have to travel some distance to get to those parts and only during weekends and holidays. So, I think I did well.

Putting things into a monthly perspective and including all kind of excercise looks more interesting – at least to me.

These graphics clearly show that March and June were the laziest months of the year! March could be explained easily, I was finalising my master thesis and it got my undivided attention. Concearning June, I have no valid excuse. FYI, June 2015 was also very poor – the mystery continues. On the other hand, September was great even this year and what is more, I have been training regularly two days out of three since then.

The average number for time spent training (excluding months June and September from the statistics) would be 19.8 hours in a month. (19.4 hours in 2015). My optimal training plan would imply 35-40 hours, so I have completed only 50% of my plan, just like in 2015. Yet, I have acctually managed to fullfill the plan, even it was only in September and October, a big improvement to the last year (I only managed to do 70-80% during busiest months). Another positive thought is that I have managed to do more kilometers in less hours than last year – hopefully, I am getting faster :-). So, let´s step it up next year!

[2] Graphics were exported from Strava.com, using StravistiX extention for Chrome. It adds plenty helpful information and it is free.

New Year is always a great opportunity to look back, close one chapter of a book, and then start fresh. Here goes my evaluation. (The purpose of this post is not to brag or impress you guys – even if I wanted to, the numbers are quite disappointing :-).) Thankfully, I did not have much troubles adding the numbers together as I have been uploading my sport activities on Strava.com. For your information, these do not include communting of any kind and no strolls.

It seems that I have biked 1.759 kilometers in 114 hours and 27 minutes while gaining 21.729 vertical meters. In other words, I have spent only about 2 hours a week sitting on my bike and have ridden poor 33.7km in average. It is very unsatisfying. Especially considering the fact that I have biked in 12 days from Germany to Slovakia which was about 900km. So it only leaves me with 850km of rides during the rest of the year and only 16.9km weekly. This means, I have only went on a proper ride once in a three weeks. However, I have include the winter time into this statistic and the fact that I have not ridden a bike since that great journey has not been embraced either. If I were to correct this statistic, I should only consider the period April – August (153 days). All in all, the weekly number would be somewhere around 39km during the cycling period. It is still only one ride a week, so I guess there is no way to make my cycling activities looking intense in any way. 😀

I have been running, hiking, and walking. Unfortunatelly, Strava.com included only those run kilometers into the following statistic. I have manage to run 496km in 75 hours and 36 minutes with overall altitude gain of 12.345m. The distance would cover on way from my hometown to Prag, and the altitude gain would cover conquering Mont Blanc for three times. Again, not very impressive. It is only about 9.5 km in a week – so it is againg only one training ina  week-time as my usual routes are about 8-11km.

Putting things into a monthly perspective and including all kind of excercise looks more interesting – at least to me. It covers rides, fast and slow runs, and hikes as well. 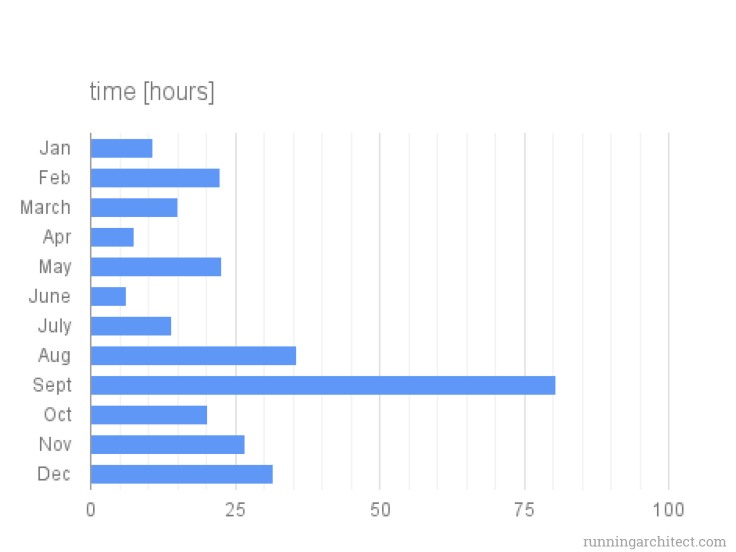 This graphic clearly shows that September was the most active month for me – yeah, the famous ride home from Germany. On the other hand, the least active month seems to be June. It is quite surprising as it is summer time in Europe, days are the longest, and it is also quiet at school. My guess would be, I was moving out from my old apartment at the end of June so I was rather busy packing boxes.

The average number for time spent training (excluding months June and September from the statistics) would be 19.4 hours in a month. It is only 4.6 hours of training, weekly. My optimal training plan would imply 8-10 hours in a week, so I have completed only 50% of my plan in 2015.  If I were to consider only the months I have been attempting to train actively, the second half of the year 2015, I have manage to cover 28.5 hours in a month, so basically 6.6 hours in a  week. It is better than the yearly average, yet still not fullfilling my plan (meeting only 70-80%). 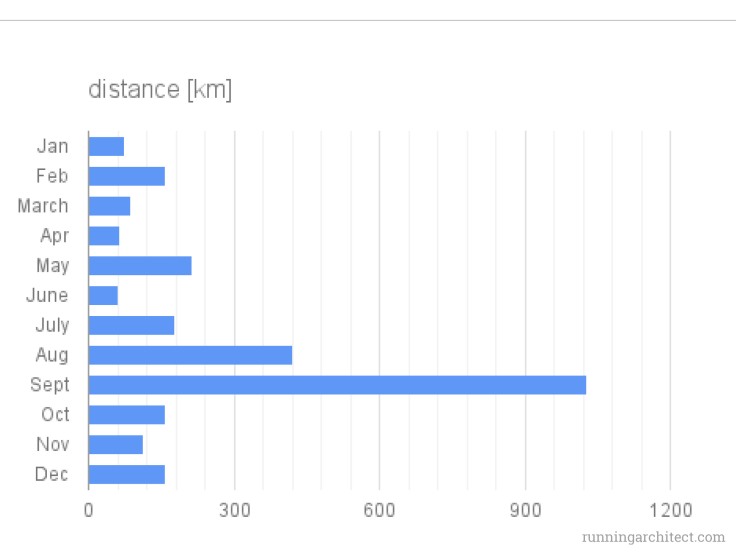 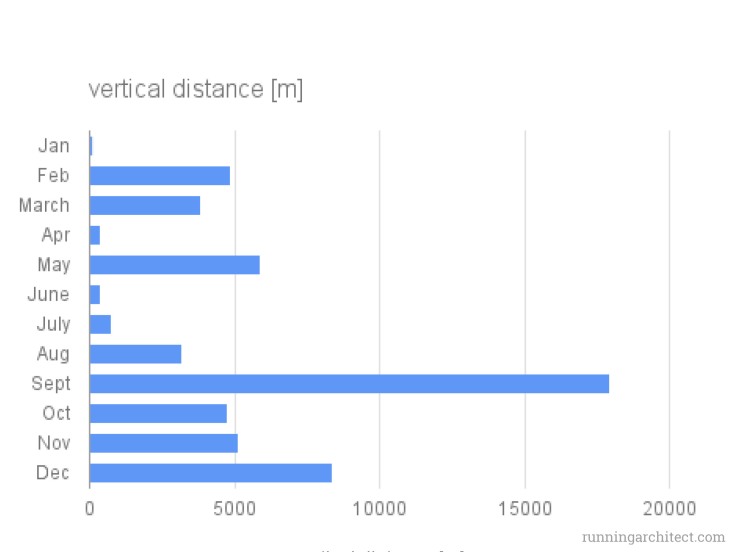 Looking at the overall distance I have scraped last year, the results are similiar. I have been skipping trainings in June and was very active in September. The vertical distance I have covered was clearly influenced by the my current location – it was quite impossible to avoid altitude when being in Slovakia. On the other hand, I was having hard time putting in vertical meters moving around Cottbus which is the flattest place in Germany, in my opinion.

I could honestly say, I have had period when I was consciously training and then times of skipping training this year as well. At the beginning of the year, I was at my laziest which is very surprising. It is usually that time of the year when the most people are starting their new chapters. Apparently, not me.  I am an exception. January is too depressing for me to start something exciting – days are too short, the weather is too cold, and the schoolwork starts to pile up on my desk. For what is worth, I have already started a new chapter this summer and will be happy with keeping the things the way they are right now, maybe improving thing or two. I have been living these past months in a belief, I am training a lot and could easily overtrain myself. Ehm, looking back, it is obviously not that case at all. I might have had the feeling, I am doing a lot – especially compared to the months before. Unfortunatelly, that was a very subjective observation. The numbers are tough and it is a little bit of let down for me. On the bright side, the coming year has twelve months – plenty of time for improvement, so let’s make them count!